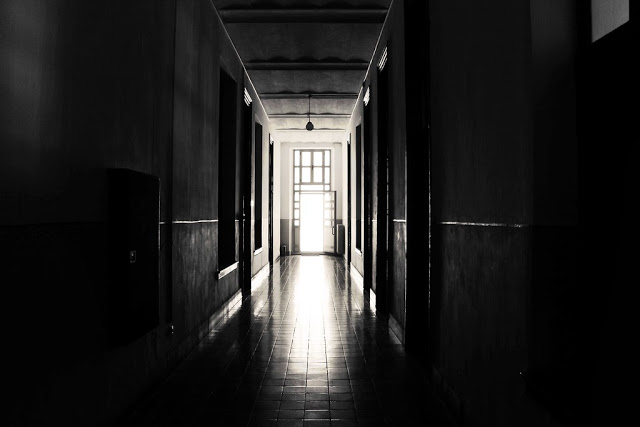 Inspired by Lights out, who's there?

11 pm, her normal bedtime. She filled herself a glass of water on the dining table. Swallowing, she felt the sound of water sliding down her throat. After finishing she looked around. Things were strangely quiet in an eerie way. She shivered.

She had graduated from university three months ago. Mum had wanted her to work in her hometown so that she would be able to return home everyday, but thinking of getting a job with more potential, she had decided to go to a foreign first-tier city, alone. Considering her situation, she had rented a cheap house near the central of the city, paying an unacceptably high rent.

A corridor, long and narrow, was at the corner of the dinning room. The end of the corridor was the door to her bedroom. It had been left ajar, light shone out from it, an ice-blue color. She preferred warmer colors, but this light would do for her first night in the cheap rental house. Light switches for the whole house were on the left of the doorframe, yellowed with age, which she hesitated before touching it.

With a few clicks the lights were off. She got into the room walking directly towards her bed. Sitting down, she took her phone and opened WhatsApp. 0 messages. Refresh. 0 messages. It was not until then she realized that there was no signal in the rental house, and as she never turned on her data, she was completely separated from the world in the past few hours when hurrying to get things organized in the rental house. Mum should have already texted her a thousand messages now. Worriedly, she turned on her data and called Mum.

“Hello?” The warm and steady voice put her a bit more at ease.

“Fibie! Oh my god I… Why did you not call me! It seemed like you have disappeared. How was everything going?”

She hesitated, looking around the old, yellowish rental house. “Oh I am living with my friend! Remember Maggie? My primary school’s friend.” She started making it up. “Never mind, everything is going w—” Crack! Something is wrong with the bed. She struggled to stand up, but it was too late. Boom! The whole bed crashed onto the filthy floor. She felt extreme pain in her waist. She tried to stand up. Two legs at the end of the bed had snapped. She stepped back in terror. “What happened?!” Mum yelled on the other end of the call. “I’m fine. I’m fine.” She tried to speak in her normal voice. “Good night mum.” She said quickly and abruptly ended the call.

Dread was spreading in her body. The broken bed seemed to be unexpected and normal. It was getting cold. Wind was whistling by the window violently, vehemently, fiercely. I should rest, she thought. I should rest and tomorrow will be a sunny day again.

She walked towards the door and stretch out a hand lazily and pulled on it. The door did not move. She dragged the door with both hands, hard this time. The wooden door started to move and squeaked as it turns. Crack! The poor-quality doorframe had a tiny spine sticking out from the top. The door hit the spine and stopped moving, as if setting itself against her deliberately.

She pulled even harder. The door did not move. She put her whole weight on the door, staring at the end of the corridor hard, as if that would make her stronger or ease the pain on her hands. A gust of cold wind blew onto her cheeks. She opened her eyes wide, but suddenly, it seemed, there was something in the darkness. She searched in the darkness for the same color and contour that she just saw, and there, at the end of the corridor, was a lump of shadow, shadow with a dark color, much darker than its surrounding area. She widened her eyes in horror, with her sudden realization that it was a silhouette, a still silhouette of a woman. Restraining herself from screaming, she immediately fumbled for the light switches on her right. Click click. Lights were on, nothing was there. “Ah.” She felt a sense of relief. Out of pure curiosity, she turned the lights back off. Click. The shadow was still there. Her heart tensed again. Click. Lights on, nothing. Click. Lights off, the shadow appeared. She fiddled the switch for a few times, started to feel bored and turned the lights off the last time, deciding to go to bed. Click. The shadow was not there. She searched for the shadow again and again at the end of the corridor, and in a sudden, she saw it.

The silhouette was midway through the corridor.

Lights on. Lights off again, just as her hand got away from the switches, the air coagulated.

The shadow was in front of her, next to the doorframe.

Lights on. She took some tape to fix the light switches, making sure that they are not going to turn off. I need to sleep, she thought. Corridor lights on, desk lamp on, the whole house bright and safe. She crawled onto the broken bed, hiding her head underneath the blankets. She watched the bright lights through the blanket, starting to feel dizzy and sleepy.

A soft click. Losing her consciousness, she did not hear it. A loud click. She was quickly alerted, shrinking into the blanket fearfully.

Click. Her heart started racing. She held her breath.

Click. It was the desk lamp. She screamed, becoming weak and limp, feeling unable to control her body. The blanket slid off down the slope of the broken bed.

Now she was exposed to the infinite darkness.