Today was the last day of the trip. But before we left for Singapore, we went to a few Global Concerns UWCSEA had worked with. The purpose of this was to make the children more confident and not being shy because of their poor family background.

These global concerns were some non-profit organizations. They built a few schools. We were going to the schools and did activities with the kids, similar to what we did yesterday.

The GC I visited was called Indochina Starfish Organization. The school has six classes and the age of the students ranges from Grade 1 to Grade 5. The guide told us, the kids coming to this school did not need to pay, and the things they learned was 2 - 3 years behind the government's public schools. Then the school bell rings. The children began to run out.

Like yesterday, we sang the "head, shoulders knees and toes" song first. As we had the translator today, the kids soon got more familiar with us. They called us "cha". I thought it means "look" in Cambodian, but the teacher told me that it was just the abbreviation for "teacher". The children here were a bit different from the UWCSEA-built school yesterday. They were in Grade 2. They were more active than the kids yesterday and they also knew some basic English words (like eyes, hands, sun, thank you, etc) , which made our communication a lot easier.

As we showed the game to the children, they were obviously amazed and stared at our fingers. They gathered around us, trying to figure out how the strings turned into the patterns. The game was like magic to them. I played with a boy, placing the string on his finger and adjust. When we finally did the first pattern together, he giggled and shouted loudly and proudly to his friend, showing them the pattern on his finger. We did the patterns again and again for many times, and he remembered all of them. He held my hand and dragged me across the room, introduce me to his friends, as if I was his best friend now.

After playing our games, the students led us to play their games. The one that impressed me the most was Bottle Flip. It was absolutely the same as the bottle flip kids played in Singapore, except that after one person flipped the bottle and it landed successfully, he will have the chance to draw on everybody else's face or arm with a whiteboard marker. Some of the girls (from Singapore) was too scared and did not join. I was very glad that I got the chance to gain trust from the kids and know some of the local games, and the children here got to open their hearts to us foreigners. This was how we look like after playing the game ⤵ 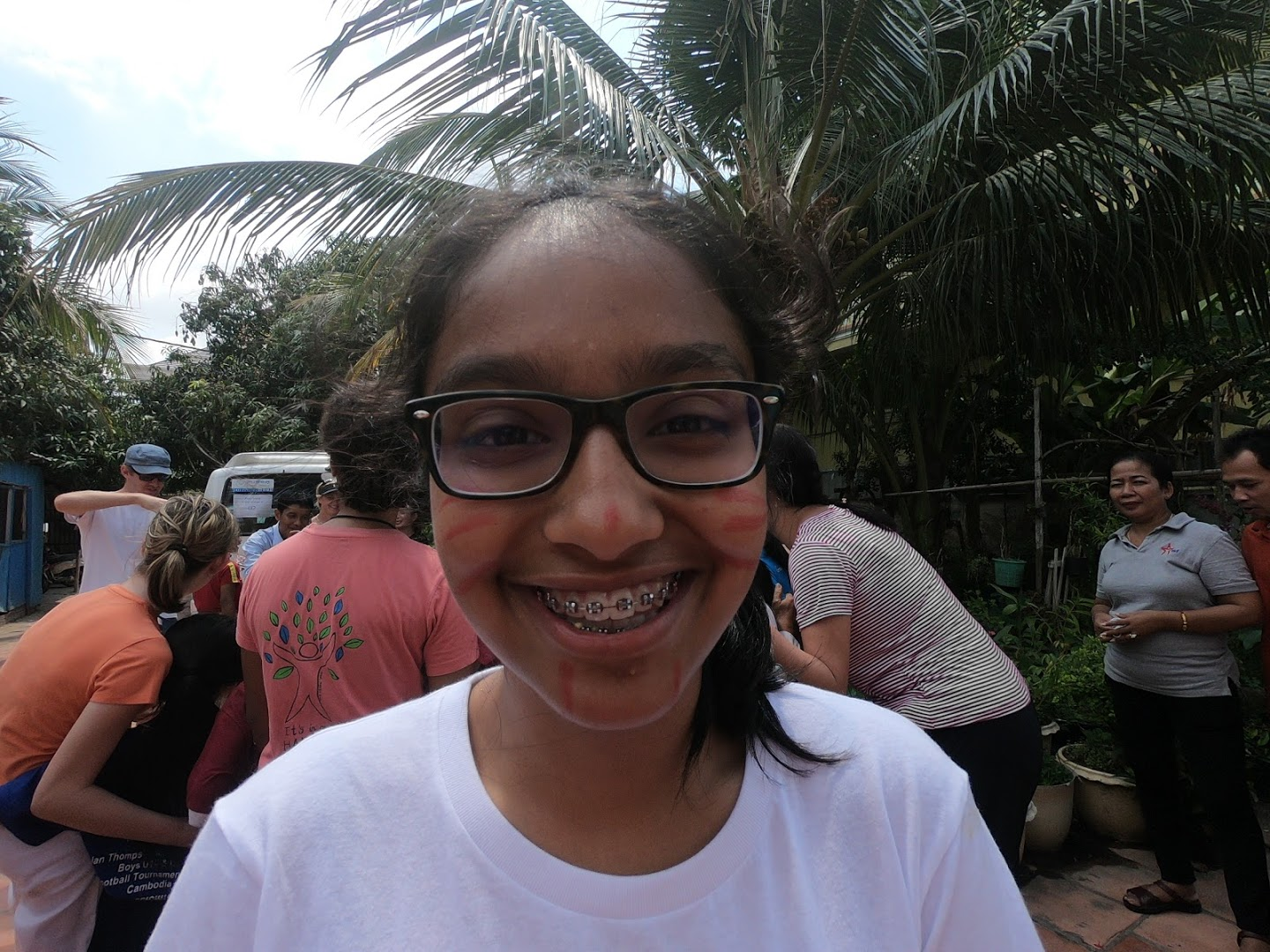 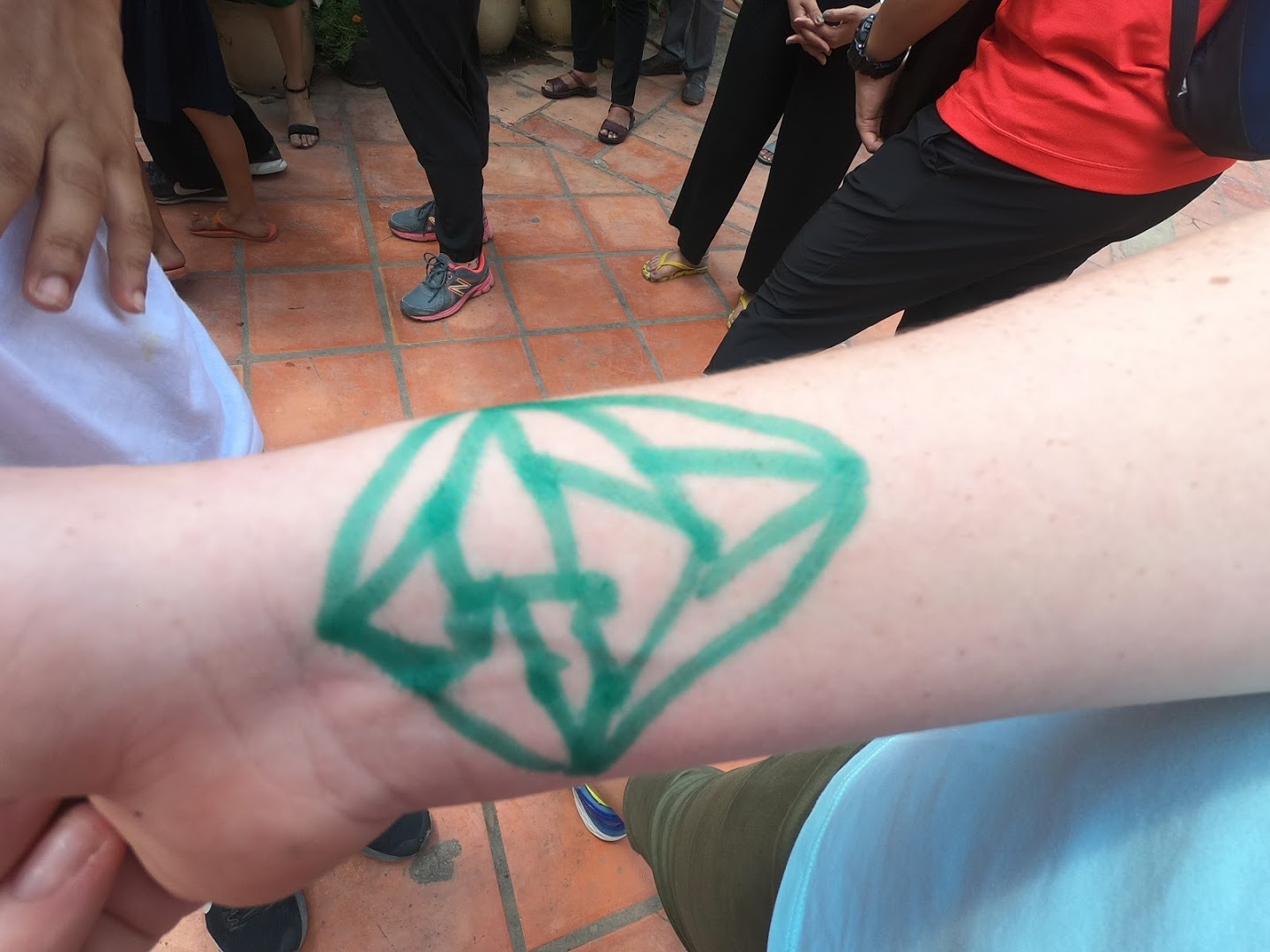 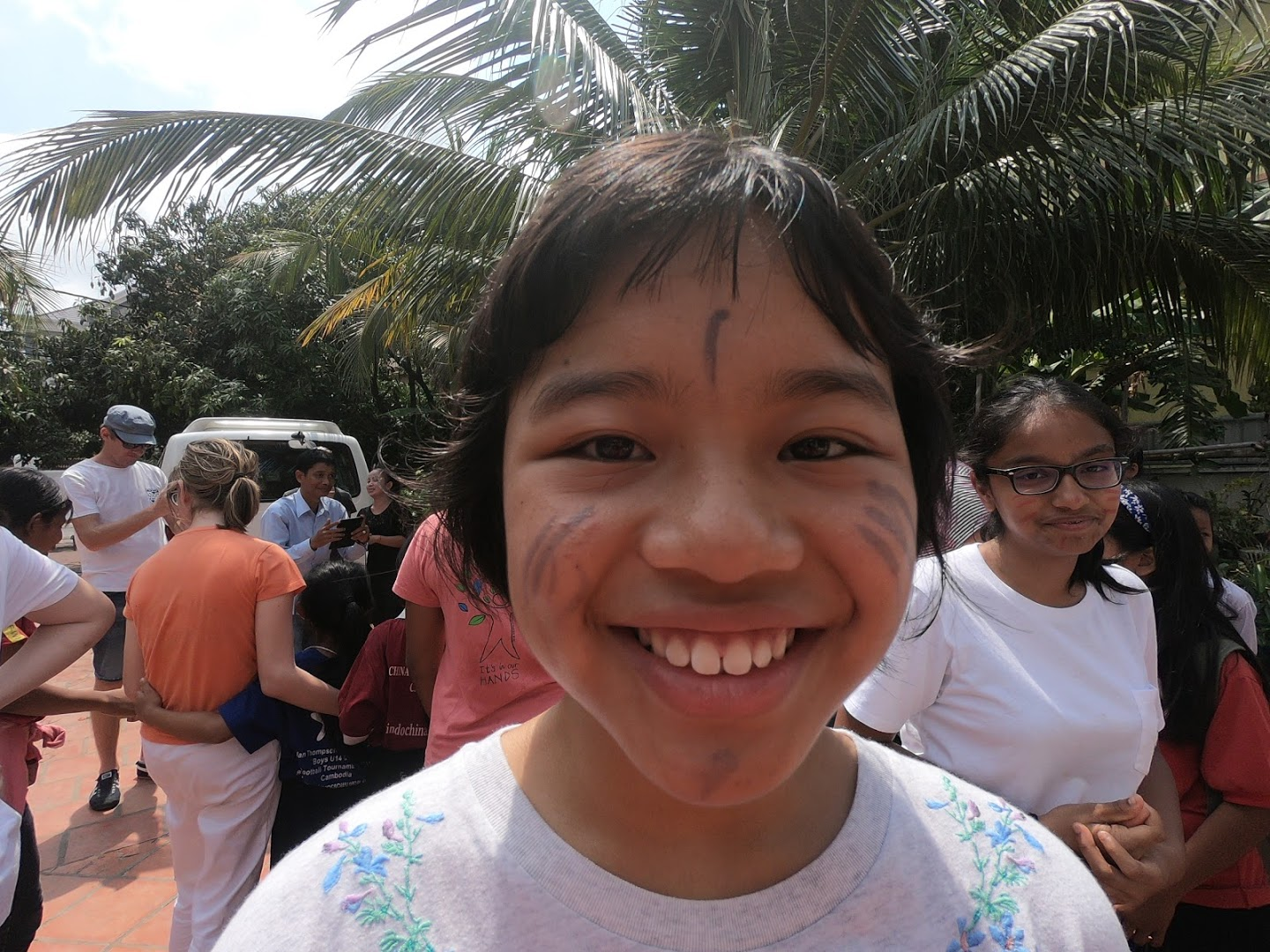 Anyways. My only regret was that I did not get to take a picture with the boy who always held my hand. I thought this would be disrespectful to him, but I did not get the chance to ask him after the games.

We headed straight to the airport after this, and then after a short flight we were back at Singapore. On the way back to Singapore, I was keep thinking about the trip. We did a pretty great job through all the process like fundraising, building houses for the Cambodians, going to the local schools, but was there any way that we could improve? Did our trip help Cambodia in the best way (especially housebuilding)?

The purpose of the housebuilding trip, according to what Ms. Jane Ritskes told us, was to fundraise for the Cambodians, and to develop a deep sense of pride in the Cambodians through letting them teach us how to do housebuilding. To us, it is surely very meaningful. But to the Cambodians, what did they get? Well, it was a good thing that they developed friendship with us and got twenty new houses, which would help their lives a lot, but was this help sustainable? Was it going to help the Cambodians to live on their own?

A better way, for example, was to teach the Cambodians how to make money. Perhaps we could teach them to make bracelets and necklaces with the materials they have and we could help them to sell it to the other countries. It might be very attractive as it includes elements of the local arts (the art of the Khmer Kingdom was very famous in lots of other countries around it before the Khmer Rouge). This help would be more sustainable as the Cambodians could gradually start to do this on their own without our help. (what if UWC do not plan to come to this village in one year? What if one day Tabitha does not exist anymore and no one comes to do housebuilding?) These were just some of my basic thoughts.

This experience in Cambodia was very memorable. I am very glad that I participated in it. It allows me to see the lives of people here. Although the assistance work we have done is very limited, everything could be accumulated. I wish people in this country can be more confident in front of foreigners, always be hopeful and rebuild their beautiful country with their own hands.